The Lyric Hammersmith Theatre is one of London‘s leading producing theatres. For a hundred and twenty five years, we have welcomed some of the world’s finest writers, directors, actors and theatre companies to our stage. From Harold Pinter to Tanika Gupta; Sir John Gielgud to Sheila Hancock; Complicite to Frantic Assembly.

Find out about the journey the theatre has been on and the people who have made the theatre what it is today by scrolling through the timeline below. 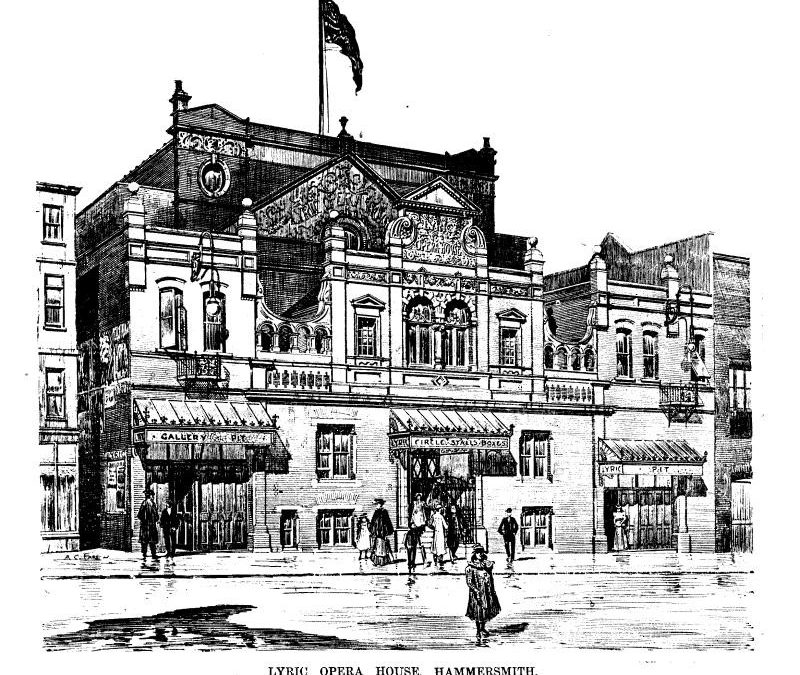 Plans for a theatre in Hammersmith were first put forward in 1886 by a local businessman, Charles Cordingly and it existed as a much smaller venue from 1888, on Bradmore Grove in Hammersmith. 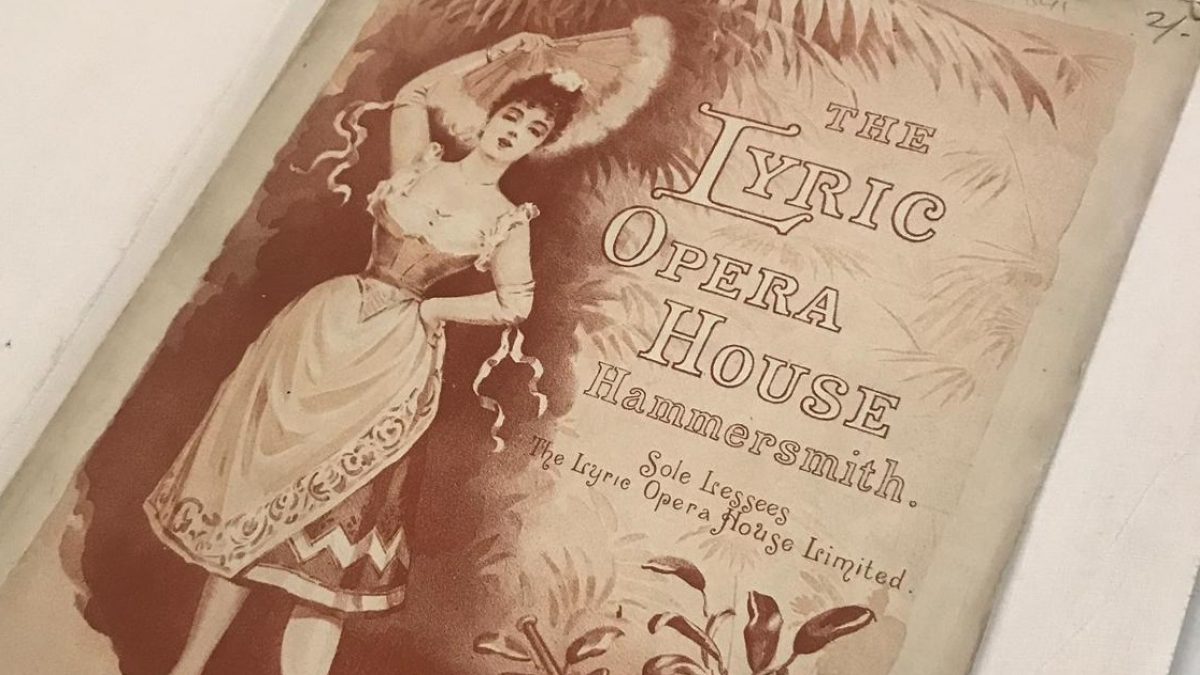 In 1895, the Lyric as we now know it was opened with the name: The New Lyric Opera House.

The opening of the building was accompanied by an address from the famous actress, Lille Langtry, and was followed by a performance of a one-act play, Dora. 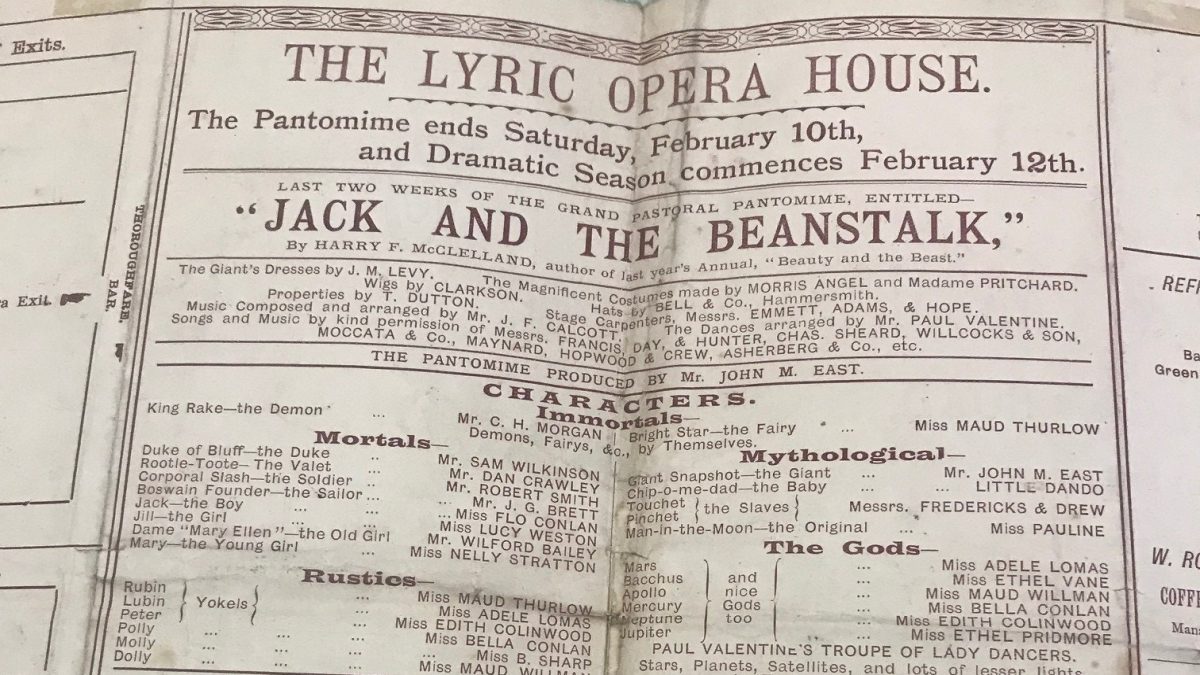 The Lyric has been performing Pantomimes since conception. John M. East, the Lyric’s General Manager from 1895, put on at least 10 Pantomimes during his time heading up the buildings programming (until 1904), which he wrote and produced himself. The first recorded Panto was Cinderella in 1897.

The Lyric suffered following the departure of John. M East in 1904, who produced 361 dramas and performed in over 100 performances during his tenure. At this time the theatre was known locally as ‘the blood and flea pit’.

The decline in audience numbers was not Lyric specific, rather an industry wide issue. Pre-war audiences had stopped attending the theatre as much, and had instead turned their attention to the Motion Picture industry. By the time the First World War arrived in 1914, the Lyric was closed more often than open. 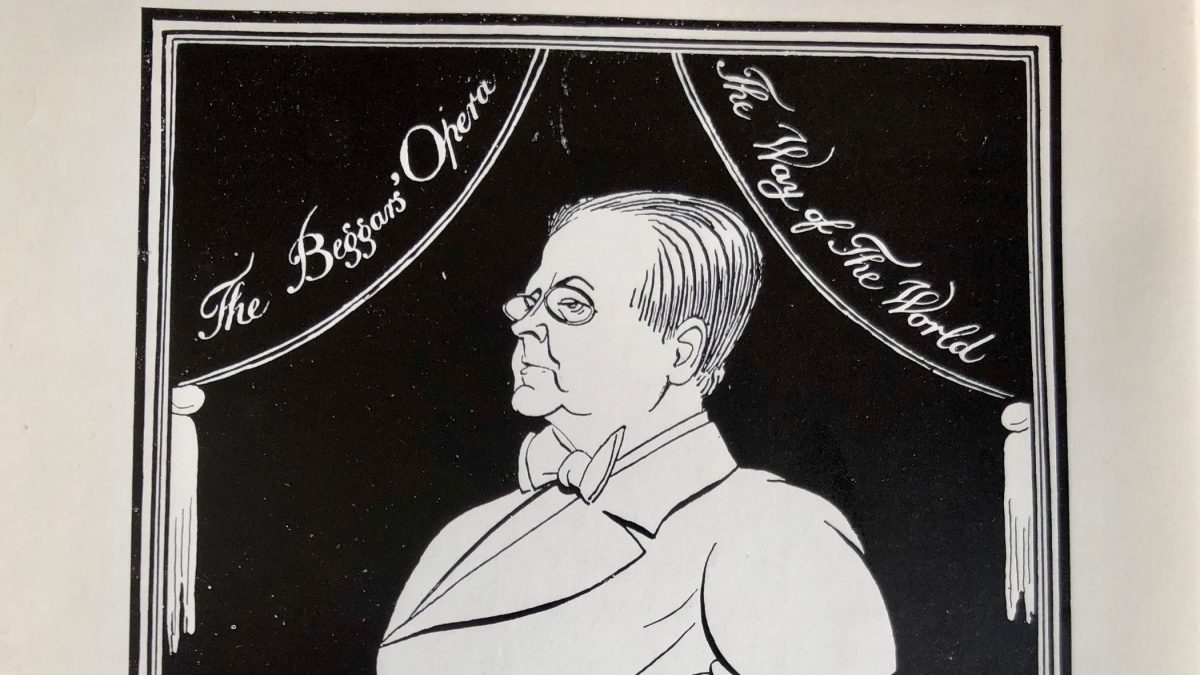 “In 1918, Nigel Playfair took a long lease. In the 1920s, productions at the Lyric made theatrical history. Edith Evans was Millamant in The Way of the World. Marie Tempest played in Midsummer Madness, and Ellen Terry made her final appearance on any stage.”

Following the departure of Nigel Playfair in 1932, the Lyric’s output did not decrease, with notable productions from Ballet Rambert.

Following the war, ownership changed hands once again. This time the Company of Four (H.M Tennent Company) took over the building, tasked with a brief to produce new plays with new creatives – and to provide jobs for actors returning from overseas following the war.

In 1949, the Lyric’s production of The Seagull – with Paul Scofield - transferred to St James’. The very same year, John Gielgud directs a J.M Barrie and Chrisopher Fry double bill with Richard Burton in the cast. 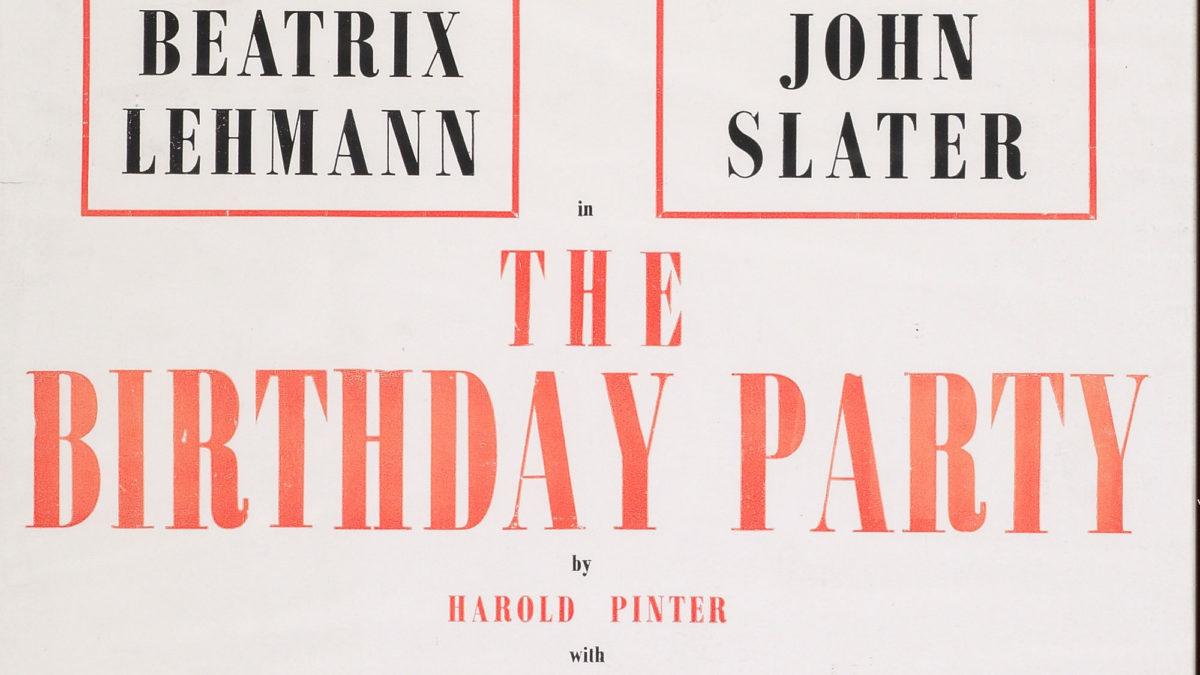 1950s: The birth of the Royal Exchange & The Birthday Party

The 1950s saw many big names perform. Marie Rambert brought her repertoire of ballet, John Gielgud led a season, the London debut of Harold Pinter’s The Birthday Party - a commercial and critical failure. In 1959, the 59 Theatre Company arrived, when they leave, they create the Manchester Royal Exchange.

1960s: The Lyric is sold to the highest bidder

In the early to mid-60s, the Lyric went through a renovation. Audiences, especially local audiences, were attending the theatre frequently enough for sustained success. The Shepherd’s Bush Gazette even wrote “[the Lyric is] a must visit in the Metropolis”.

But despite the success early in the decade, the Lyric noticed dwindling numbers as the 60s went by. Eventually, the building went up for auction in 1965. Three years later, it was sold.

According to some sources, the auction was won by “Mr. Richards”, who brought the theatre for £26,000. But there were complications… the council also thought they’d won the building in the same auction, for the same price. As a result, the Lyric went back on sale and was eventually won by the council for £37,500.

“Local Government states ‘the Minister accepts the Inspectors recommendation that he should permit the demolition of the building’. This is subject to the fibrous plasterwork of the auditorium being taken down and stored and where that is impossible, moulds shall be made and stored.” 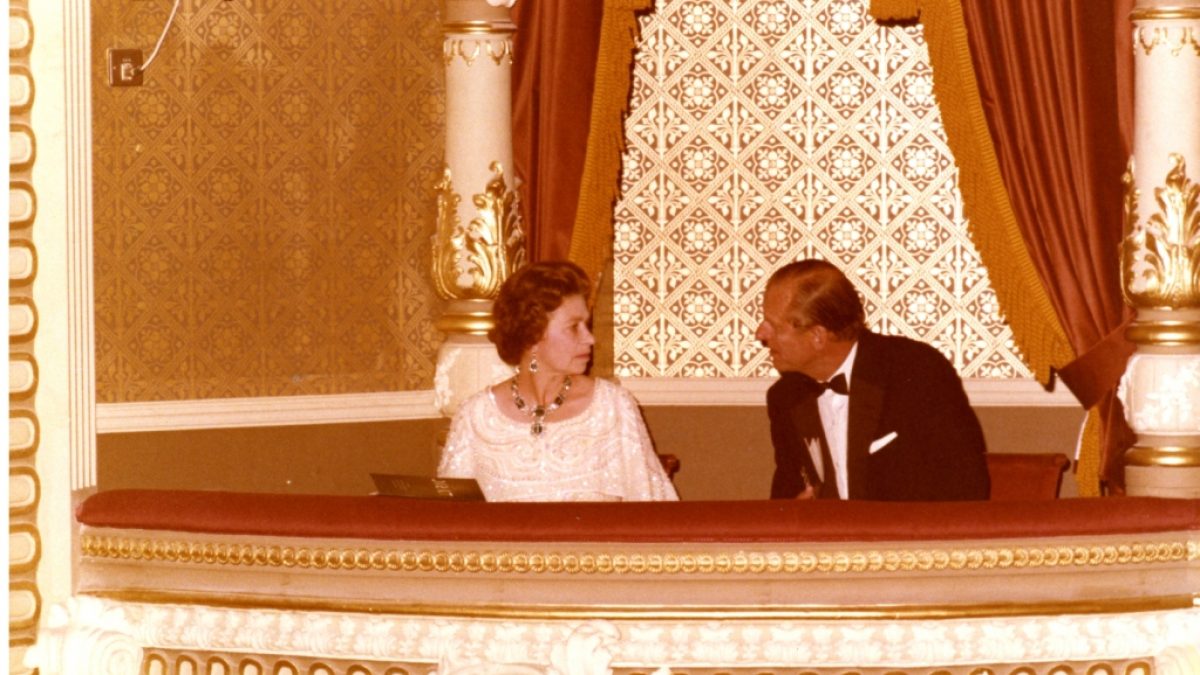 The demolition started in 1969 and a local campaign began to save the Lyric. The Vice-Chairman of the Hammersmith Society said “a revived Lyric, because of its acknowledged merits, has a far greater chance of making the new Hammersmith Centre a landmark in London.” The campaign was a success and the Lyric was reopened by The Queen and His Royal Highness, Prince Phillip in 1979. 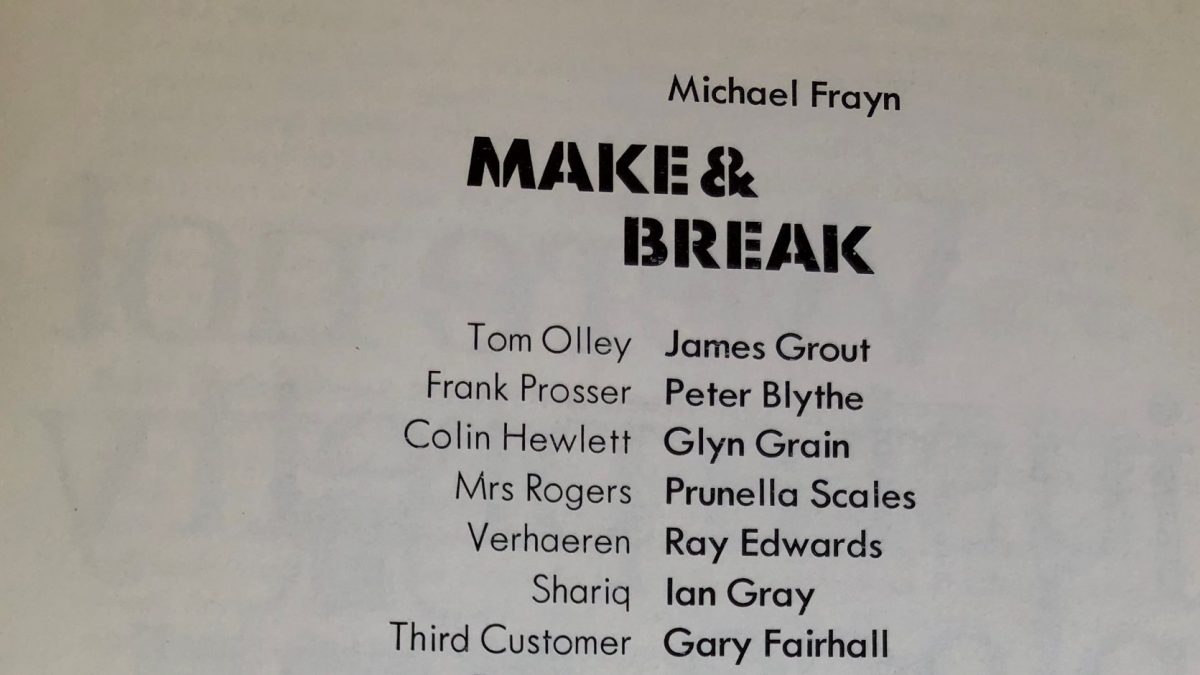 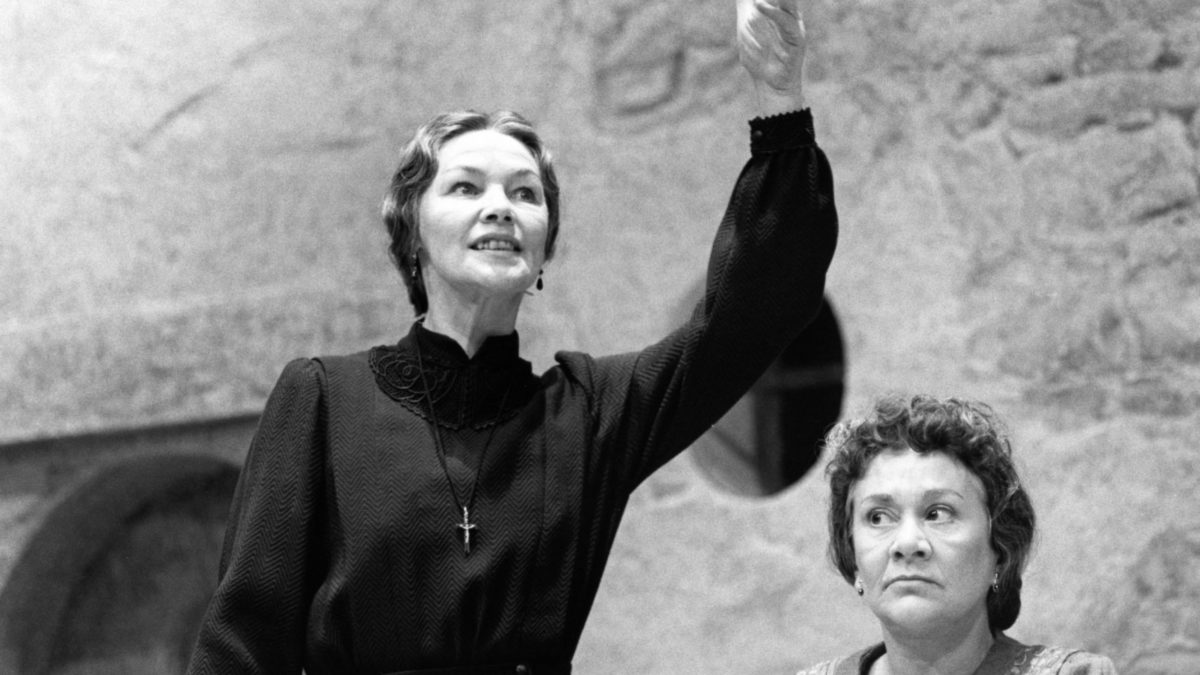 Artistic Director Peter James led the company until 1992. Notable productions included David Freeman’s production of Morte d’Arthur performed in four parts over two evenings and the Olivier award winning production of The House of Bernarda Alba with Glenda Jackson and the debut of Michael Frayn’s Noises Off with Patricia Routledge. The Studio also continued to thrive with a season curated by Anne Lambton. 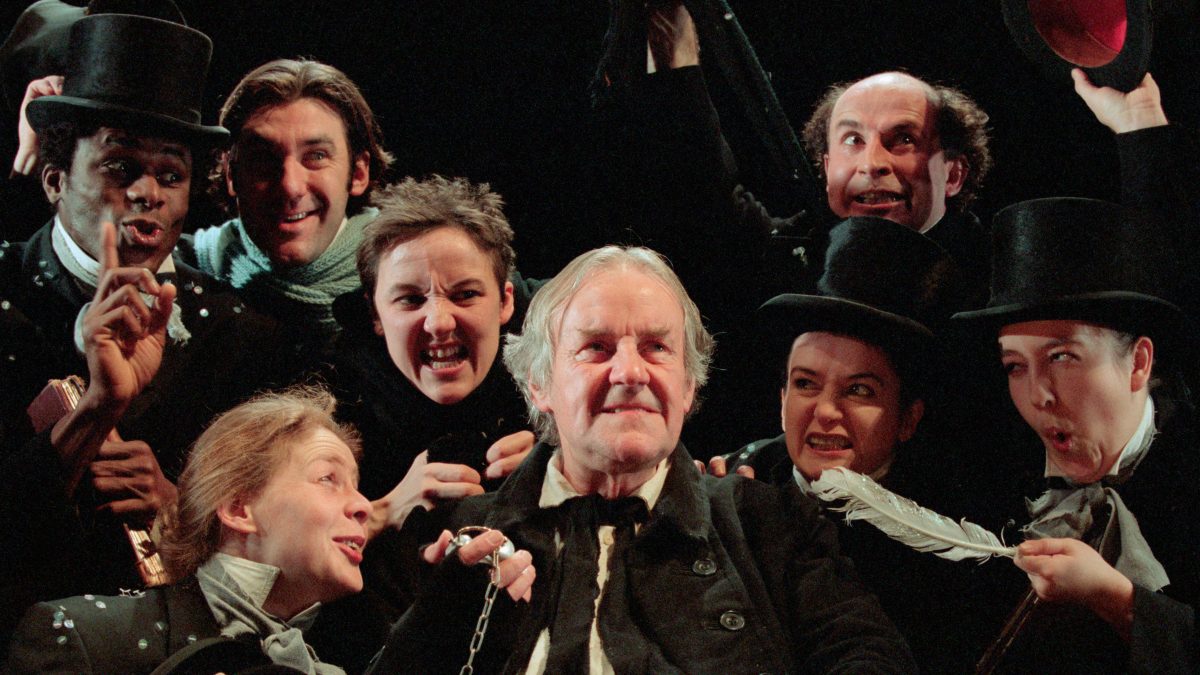 Bartlett directed productions of classic British plays, foreign classics, which he translated or adapted, and a series of notable Christmas shows, including his adaptation of Charles Dicken’s Oliver Twist and A Christmas Carol.

Sue Storr in this period oversaw the development of local partnerships in support of the theatre’s capital development to create new education and rehearsal spaces and to relocate the theatre’s entrance from King Street onto a newly built public Square for West London - Lyric Square. She also worked closely with a number of producing consortia to present a wide range of International work. 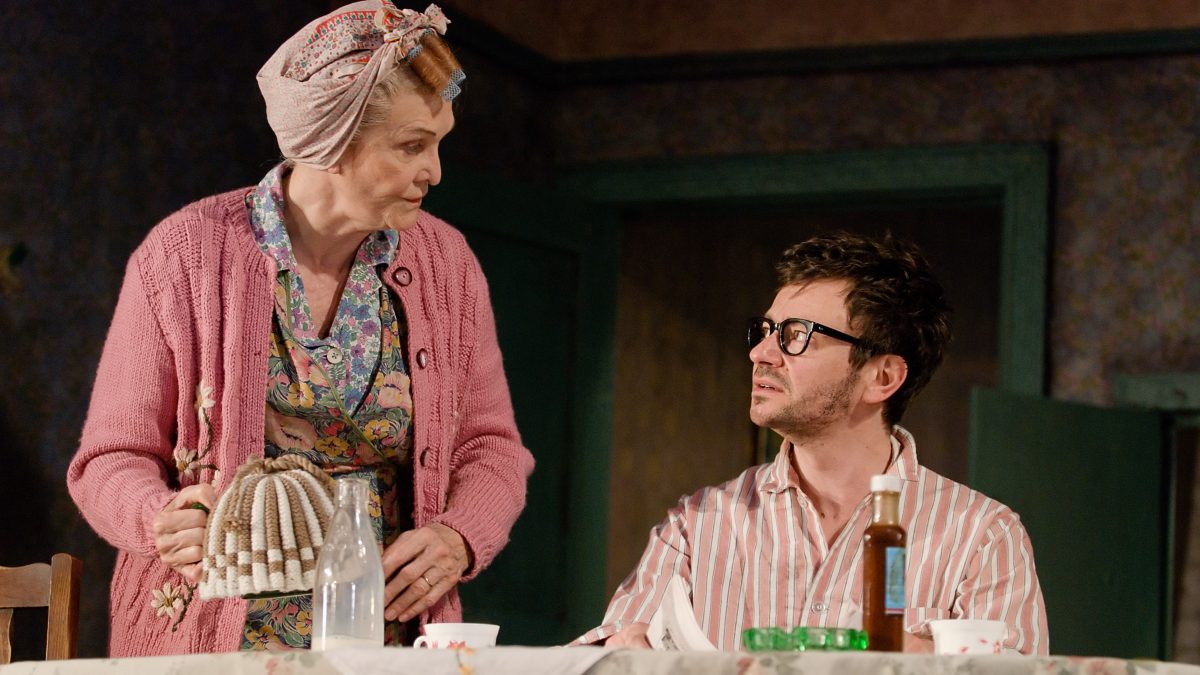 ‘The Lyric for me was about two things. First it was about working together. The whole spirit of the place was collaboration…Second it was about young people. My incredible Executive Director, Jessica Hepburn, drove a remarkable campaign to bring art & young people in the community into direct contact with work.’ David Farr

When Neil Bartlett and Simon Mellor left the Lyric in 2004, David Farr and Jessica Hepburn replaced them. The same year, saw the completion of the Lyric capital project – with the entrance moved to Lyric Square.

The refurb created a new ticket office, street level cafe, and rehearsal and workshop spaces. The project was designed by the internationally acclaimed architect, Rick Mather.
David Farr invited many companies to collaborate with the Lyric including Vesturport, Kneehigh, Filter, Frantic Assembly, Gecko, Vanishing Point, and individuals like Lemn Sissay, Mark Ravenhill, Sophie Woolley and Lisa Hammond. Notable productions included Metamorphosis, Ramayana, Angels in America, The Bacchae, the stage adaptation of Absolute Beginners, the 50th anniversary revival of Pinter’s The Birthday Party and David Rosenberg’s Hitchcock style thriller Contains Violence, which was performed in windows opposite the theatre with audiences using earphones and binoculars. The theatre also began to establish its reputation for pioneering work with young people across West London, providing pathways into theatre for those from disadvantaged backgrounds. 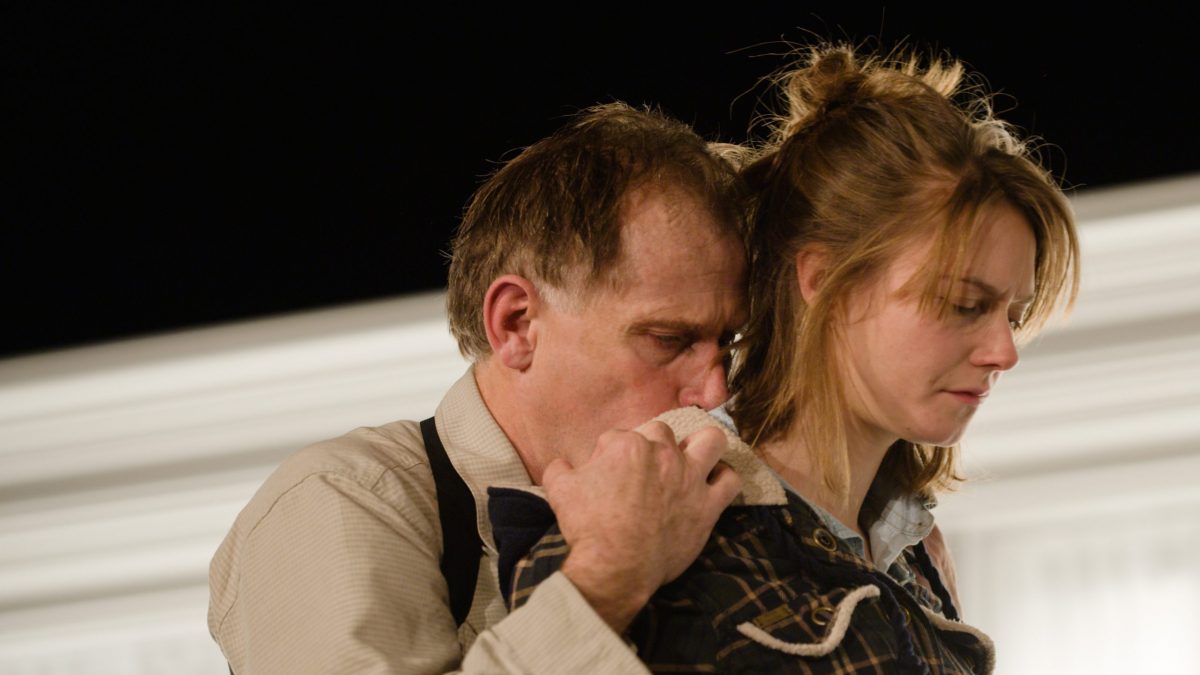 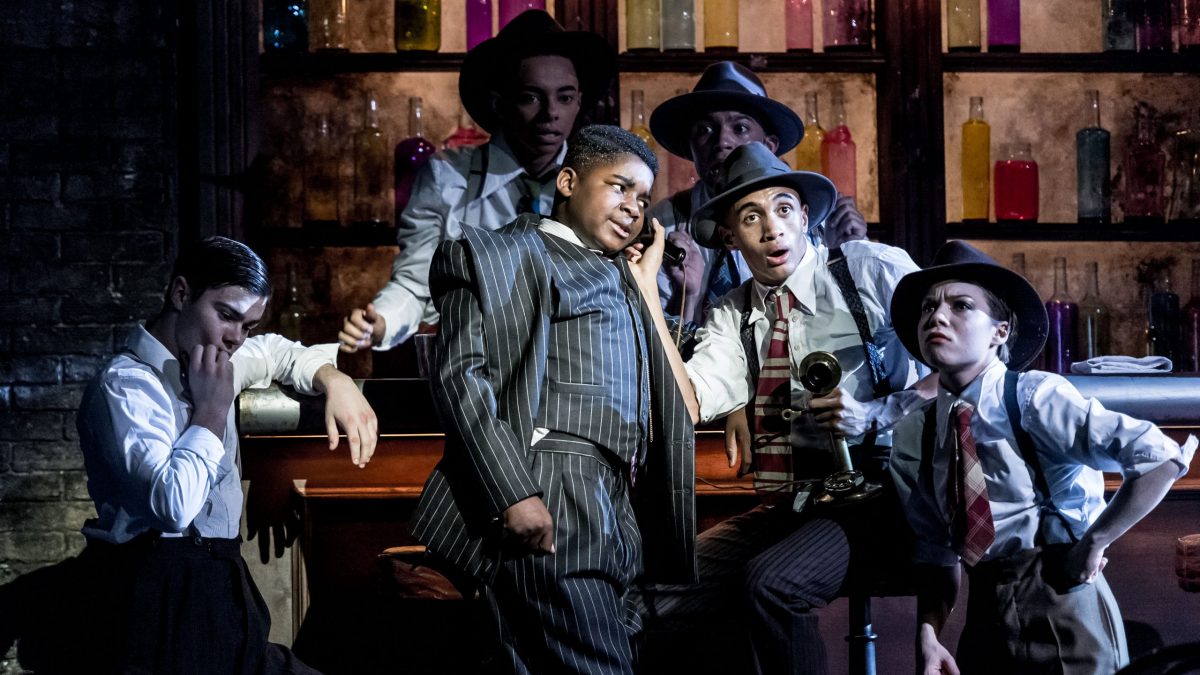 Following the reopening of the theatre, Jessica Hepburn left the Lyric, with Sian Alexander becoming the new Executive Director in October 2015. 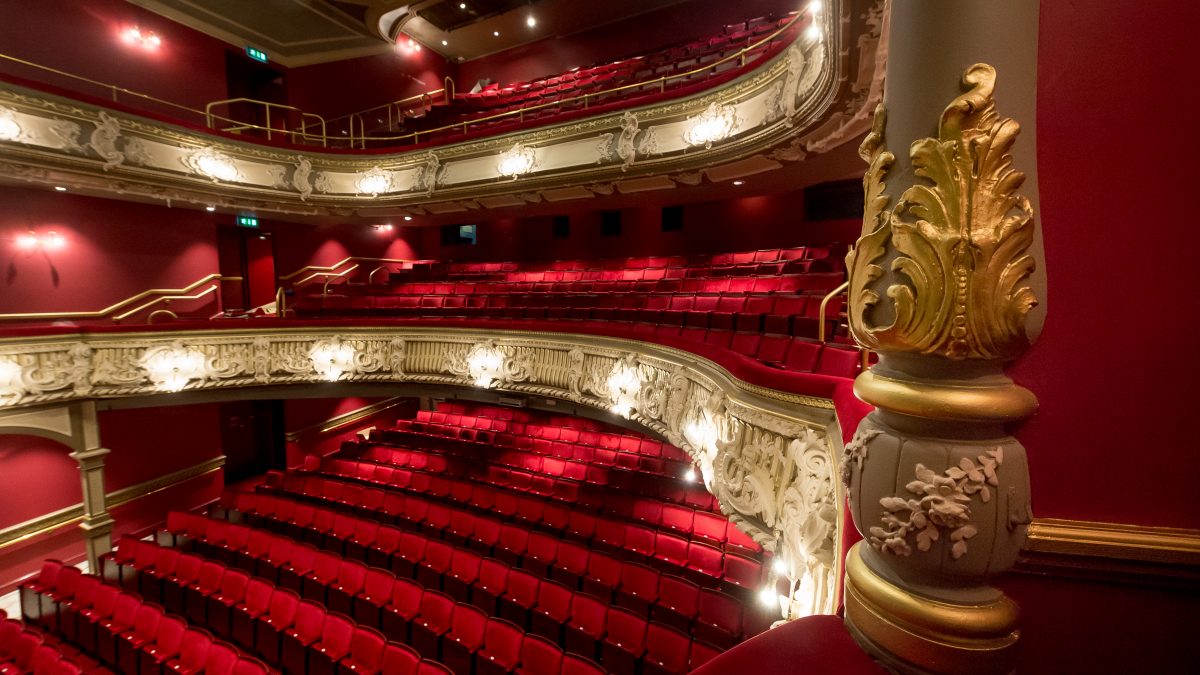 The Frank Matcham Main House is refurbished for the first time in 40 years restoring and redecorating the plasterwork. Plus a full refurbishment and rewiring of the Studio Theatre to create a flexible and fully LED theatre space. 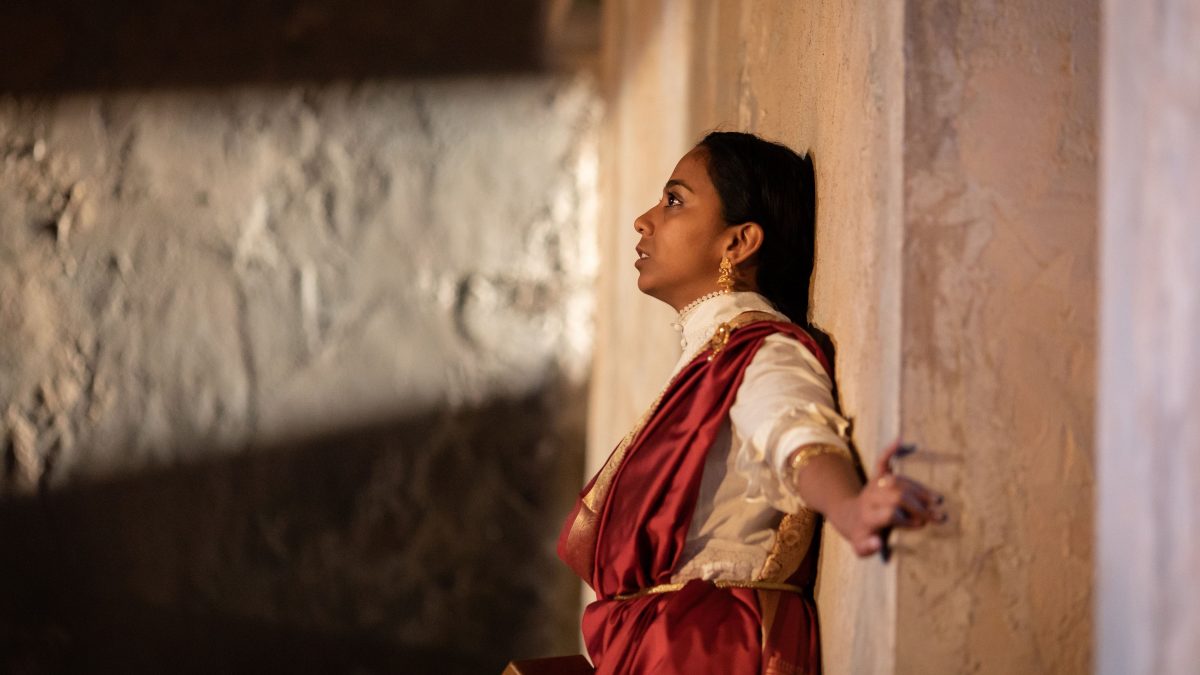 Rachel O’Riordan joined the Lyric as Artistic Director in February 2019, with her first programmed season beginning in September 2019 with Tanika Gupta’s adaptation of A Doll’s House.